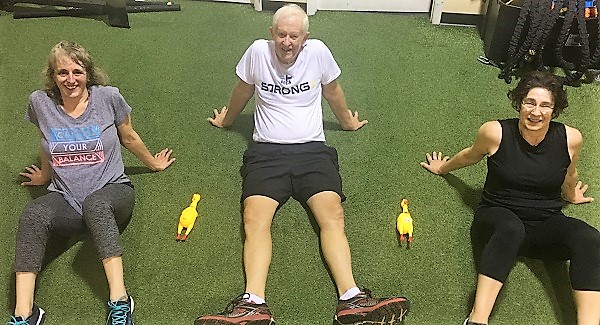 What often gets you the most excited about fitness is when you find yourself doing something you didn’t set as a goal and weren’t sure was even possible.

When you get fitter it happens broadly, making so many little things better that it is impossible to predict what they will be.

We have our stated goals with fitness, but it’s often the little unexpected surprising moments of ability we didn’t know we had that delight us the most.

And when you experience one of these, it will fuel the fires of motivation to keep you dedicated indefinitely.

Here are some real-life examples:

When you keep going, staying active, getting more capable, you can handle what comes your way.  Your world gets a little bigger as you feel more comfortable and capable in your body.

There’s the goal you ask for, and then there’s the bonus ones you get that you didn’t even realize you wanted until after you’ve gotten it.  And that makes it all the more sweet.  With fitness, you ALWAYS get more out of it than you put in; it’s just sometimes more of something you didn’t even know you wanted.

This is what the Funtensity approach to life is all about: Make fitness enjoyable and engaging enough that it stimulates a shift in mindset such that you enjoy it enough to do it consistently enough to get the changes to your body and improvements in brain health long-term.

Improving the emotional response to the concept of “exercise” leads to consistent participation – and that’s what opens up the new opportunities.