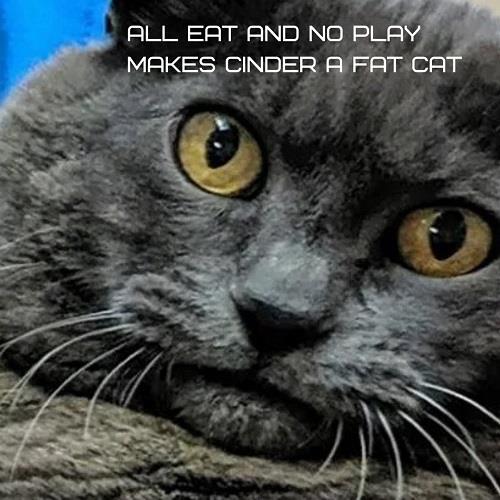 “We see cats that fat every day. Every day,” said one veterinary hospital worker.  Another said, “Twenty years ago, we didn’t see 25-pound cats. Now, 20 pounds is the new normal.”

After reading a recent article about the fat cat “Cinder-Block” who came to fame recently in a video showing it struggling on a treadmill, it got me thinking:

1. Watch What You Say or Else

One thing that stood out in this article is the casual language used by everyone – freely throwing around “fat” and “obese” as descriptors.  I write and speak for several health and wellness organizations where the dogma is now that you cannot say “obese people” (because Twitter or a blogger somewhere unilaterally decided this is offensive.)  Now you have to say “a person struggling with obesity.”  How inelegant, irrelevant and clunky for us writers.  And it changes nothing…it is still just as unhealthy as it always was and will be.

With many obese family members and countless obese clients over the years – yes, I’ve actually spent time in the real world with many people “struggling with obesity” and I can assure you, for anyone seeking real change and improvement, not one of them cares about the language changes described here.

Very soon we will be told to start referring to “fat cats” as “felines who are struggling with obesity.”  Which will also change not a single health outcome.

Welcome to the age of appearing progressive while actually accomplishing nothing of value in the real world. It used to be that “no one cares what you say until they know how much you care.” Now no one cares how much you care unless they have no problem with how you say it.

2. There are No Fat Cat Acceptance Societies

At least not yet.  There will probably be one soon.  Fortunately, one of the veterinarians quoted above, Ernie Ward, has founded the Association for Pet Obesity Prevention, so someone with some skin the game is actually doing something positive to point out the inescapable reality that obesity is unhealthy.  In a free society, there is no need for “fat acceptance societies” since current laws prevent you from forcibly getting someone healthy.

We should accept people for who they are, but also accept, realize, and openly admit that all of us humans – me included – have things we can improve on. For some of us, it is our spending habits, for others it is anger, and for others it is health behaviors.

We can be who we are while simultaneously working to be a better version of ourselves.  In fact, we have a kind of responsibility to ourselves, our loved ones, and society in general to make ourselves a bit better in whatever ways we can as we navigate life.

3. Fat Cat (and dog) Videos Are Popular and Viral

Imagine if we all had a big chuckle at videos of a fat guy doing stuff!  That was kind of my childhood.  I will never forget entering a restaurant and people elbowing their friend and pointing in my father’s direction for everyone to “check out that really fat guy.”  This practice is universally derided now, as it should be.  Why is it not the same for our pets?  Especially because we claim to “love” them so much.  If you own a pet like “Cinder-Block,” you don’t love it, that much I know.  Because…

4. Everyone Describes Fat Pets as a Health Issue

You don’t hear two sides to the argument because there isn’t a second side.  Funny how clear and easy-to-see this is when we are discussing animals and not people.

“When I see that cat, I don’t see the excess fat. I don’t see the size. I just see the disease,” said Ward, who characterized the cartoon cat Garfield as his field’s biggest enemy. “He’s eating pasta! By making light of that, we’re saying it’s not so bad — a fat cat is a happy cat.”

But fat pets live shorter lives. A cat as large as Cinder-Block is highly likely to develop diabetes, Ward said. Like many overweight pets, she has arthritis, which can make jumping to the floor or even walking painful.

Pets (and Humans) Love to Play…Until They Don’t?

Pets – and people – love to run and play until it starts to suck to move.  Once we get too heavy, moving is a challenge, everything is hard, and we start to exhibit the kind of listlessness shown by Cinder-Block pawing the treadmill while standing off to the side.

Play – the verb, not the noun – and eat a sensible amount of healthy food.