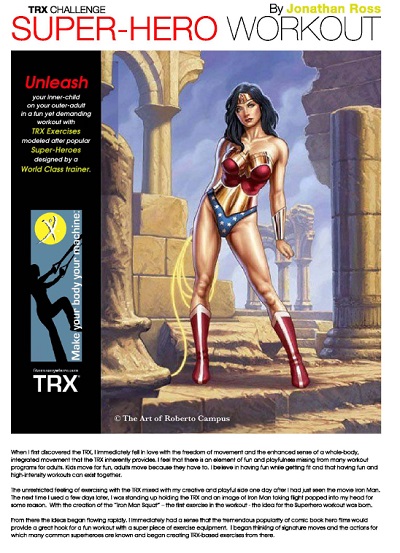 A decade ago, in convention center far, far away, the Superhero Workout was unleashed.

It was 2008, and back then, I used to work for TRX. The first Iron Man movie had recently come out, and it inspired me to create a superhero workout using the TRX suspension trainer.

It was fun to create, fun to teach and fun to do.  Oh, and it was intense enough to provide a great workout. Of course.

One of the first times we taught it, someone who worked in sales did the workout. After it was over, his face flush with excitement and sweat and his eyes alive – he came over to me and said: “That was great! The whole time I was doing the workout I was imagining I was the superhero and I was distracted from how hard I was working.”

You can see a bunch of the exercises in this video.

Over the years, I’ve expanded the range of characters with an eponymous exercise to include Black Panther, Captain America, Hawkeye, Black Widow, Aquaman, and Thor to complement the original cast of Iron Man, Wolverine, Batman, Wonder Woman, Spiderman, Superman, Daredevil, and Neo (from the Matrix…remember this started in 2008!)

Looking back, this was the first time I created a major merger of the ideas of fun and intensity.  Most big ideas are like that, starting small with a specific thing, a seed, and the core idea growing around it.  At the time, I was just beginning to study the brain and the next decade of research and study plus the irresistibility of fun has created Funtensity.