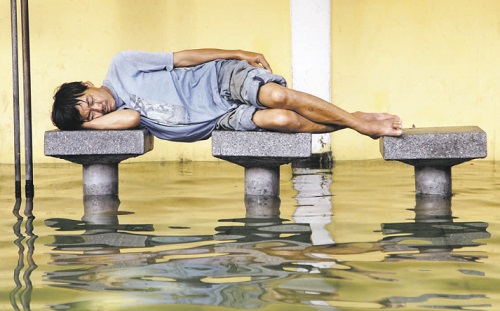 Elephants need only 3-4 hours of sleep a night, while mice sleep 14 hours.  Humans are somewhere in the middle, but some of us push it and try to get by on “elephant sleep.”

Funtensity is about optimal brain function now and brain fitness later. And sleep is an essential part of achieving that.

The people who claim they do “just fine” on 4-5 hours of sleep a night are deluding themselves.  It’s one of the most common myths of our hard-charging, always-on, non-stop lifestyle.  With a few exceptions (there are always outliers), adult humans need 7-9 hours of sleep a night.  There are even some fitness leaders boasting that they get 4 hours of sleep per night and use mindset to feel good and positive about the day. Nonsense. Even if that is truly what helps you thrive it is the height of irresponsibility to recommend that to others.  That is simply not how our bodies work.

An interesting note about all this is that your body does not need 7-9 hours of continuous sleep. It can be in two chunks of 3-4 hours, 4 chunks of about a couple hours, or any combination that works. Some indigenous cultures and historical figures like Da Vinci and Tesla have followed unorthodox sleep schedules that suit their needs but would admittedly make it hard to function in modern society.

One key factor seems to be to try and limit long periods of wakefulness rather than worry about a long period of sleep.

Here are some other sleep myths.

MYTH:  “The early bird gets the worm.”

REALITY:  Not every bird eats worms.  Someone who loves to get up early is called an “early chronotype,” while someone who prefers to sleep late is a “late chronotype.”  Despite cultural bias toward preferring the early chronotype, there is an evolutionary basis for all types.  When we were hunter-gatherers, some people had to stay awake at night for night watch to guard the tribe.  And those genes get passed on.  Like everything else about humanity, there is a lot of variety and we are not all intended to be early risers.  We all function best if we can match our schedule to our preferences.

REALITY:  Human adults need 7-9 hours of sleep at every age.  Kids usually need a little more – around 9-11 hours.  Just because older individuals struggle more often with sleep due to smaller prostates making men get up to go more often, menopausal women having hot flashes, and both genders making less melatonin (a hormone that promotes restful sleep), does not mean it is normal.  Since it happens so frequently, the myth that it is normal becomes more common and easier to believe.

Lose Sleep and You Lose a Lot More Than Z’s

Lack of sleep erodes our bodies, our brains, and keeps us from making good decisions. Missing sleep also makes learning harder.  While sleeping, the brain processes information we absorbed through the day and often continues problem-solving while we snooze.  This is one of the many uses of dreaming by the brain.

Very bad sleep deprivation can lead to hallucinations.  So powerful is the brain’s need to “dream” that you’ve likely noticed that if you’ve been sleep deprived and nodded off momentarily in what is called a “microsleep” you may have noticed that you had a quick dream even during a split-second nod off. (I had these all the time in high school, especially in history class for some reason.)

People who average less than 6 hours a night may have a higher risk of diabetes, heart disease, and obesity.  Recent discoveries of what happens to your brain when you sleep underscore the importance of it. Your brain cells shrink allowing flushing of toxins and waste products from the brain.  This happens at a certain point in each sleep cycle and we should optimally get 3-4 complete sleep cycles per sleep.  Miss out on this “self-cleaning” of the brain by your body and you are increasing your risk for degenerative brain disease. (This is another way the “I only need 5 hours of sleep” dopes are harming their future selves.)

Sleep deprivation raises blood levels of ghrelin, a hormone that increases appetite, and lowers their blood levels of leptin, a hormone that inhibits appetite.  Both of these hormones are normal.  When we eat a larger meal, ghrelin levels drop and leptin levels increase.  When it is getting closer to the time to eat again, the opposite happens and the increase ghrelin levels trigger us to begin eating again.  Sleep deprivation throws this balance off and drives us to eat more when we are sleep-deprived in an effort to get more energy.

It’s funny how proper sleep always seems more important when you’re struggling to wake up after not getting enough.  Trying to get by as a human on an elephant amount of sleep will just have you looking like one.  Don’t fight it – feeling well-rested feels like nothing else.  Particularly after a few days of not getting good sleep, getting enough feels amazing.  You feel better, but you’ll look better and think better too!