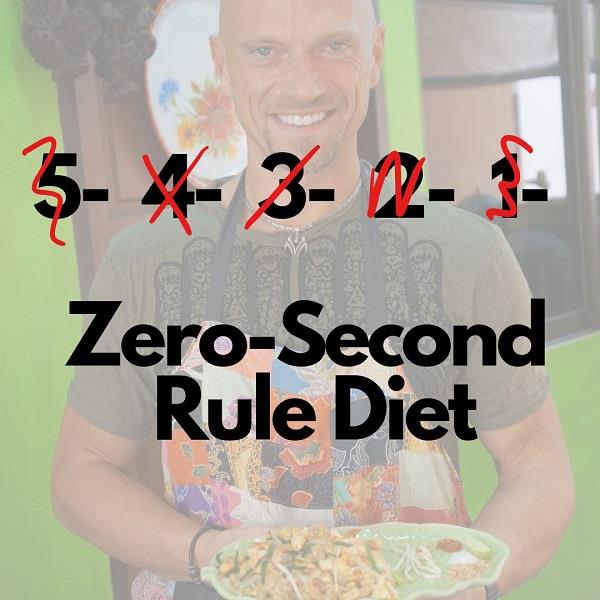 I came across some research about the “5 Second Rule,” and it gave me a fun idea and another way to think about this rule and food.

But this isn’t about the science (if you do want some of that, it’s at the very end), it’s about the idea it created.

What if we started a “Zero Second Rule Diet?”

Most healthy foods – yogurt with berries, avocado, grilled tomato, eggs, salad, homemade protein power balls (like home made protein bars), bell peppers, apples, grapefruit, hummus with naan bread, olives, peanut butter, would not get eaten if they touched the floor at all, regardless of amount of time.  There’s no amount of safe time since the foods would pick up significant junk on them from even a moment’s contact with the floor.

On the other side of this we have the foods you could leave on the floor forever.  Hard coated chocolate like M&Ms, most candy bars, chips, cookies, French fries, doughnuts and similar foods would need a quick blow of air or nothing at all, and could stay on the floor for much longer than 5 seconds and still be edible.

If you ate only foods that couldn’t survive a trip to the floor, you could build a pretty healthy nutrition plan around that.  Now, some healthy foods have hard, non-porous exteriors while some junk foods are soft and sticky.  I did have almonds this week and those would be fine for a while on the floor.  And if you dropped a piece of cake, you might not be inclined to try and pick out all the dirt it would pick up even for a split second. But, we’re just having fun with this idea here…

Don’t take this too seriously or over-think this too much.

The main point of this humorous treatment of the five second rule is this:  I’m trying to get you think more about the quality of the food you eat most of the time.  If you considered what would happen to everything you ate if it fell on the floor before you ate it and what you would have to do to make it edible again if it did, you’ll be on your way to thinking about the properties of the food you’re eating.

And most importantly – you’re stopping to consider what you’re eating – and that’s really the hidden point of this.

More thoughtfulness about what you are eating will lead to more thoughtful food choices…and that’s what I’m really promoting.

Oh, but what did the science say about the 5-second rule?

Bacteria can transfer to food in as little as one second (so the 5-second rule really isn’t a thing.) Here’s that article.  Also, researchers at Aston University in Birmingham, U.K. studied the rate of bacteria transfer in food items dropped on the floor and picked up within three to 30 seconds. They found that the amount of time an item spent on the floor was directly related to bacteria levels – more time equals more bacteria.  You can read about that study here.