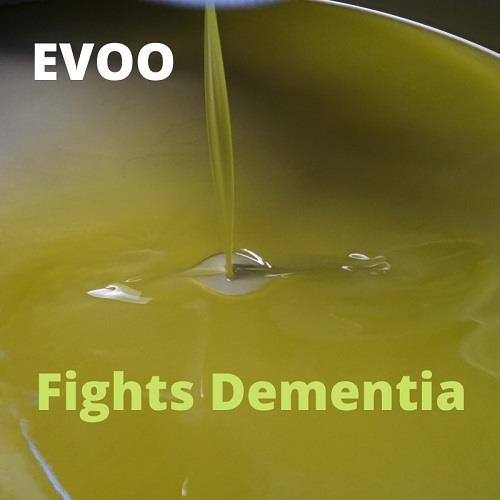 Extra Virgin Olive Oil (EVOO) can aid in preventing Alzheimer’s and other dementias.  EVOO just keeps racking up the accolades!  It’s not having a moment, it’s having a decade – or two.

The Takeway:  The Recent research showed that EVOO can potentially help prevent dementia.  When mice bred to accumulate defective tau proteins were fed EVOO, they were 60% less likely to show accumulation of defective proteins associated with dementia than the control group.

Pretty cool.  And makes you wonder why some people are now claiming that (any kind of) oil is unhealthy since it is processed.  Probably the same silly people who believe in astrology and love glitter.

More Details – And What Does “Extra Virgin” Mean Anyway?

The photo above is from a visit I made to an olive farm in Italy.  It was tremendously fascinating to watch a bunch of olives become the delightful green-gold liquid we know as EVOO. And by the way, what does “extra virgin” mean when it comes to olive oil?

1-Olive oil is considered “extra virgin” when it has been produced by a simple pressing of the olives (meaning, no chemical extraction methods were used).
2-Extra virgin must meet certain laboratory tests on things like acidity and levels of peroxide.
3-Extra virgin olive oil must taste like olives and it can’t have any negative tastes that professionals refer to as “defects.”  (Olive Oil Times, referenced Dec. 2019)

Now you know.  “Extra virgin” is one of those terms that we use often enough to not stop to consider what it means, other than “good.”

Back to Our Regularly Scheduled Program

In this current study, researchers genetically tweaked the rodents so that they were prone to accumulate excessive amounts of the otherwise normal protein tau.

In Alzheimer’s and other forms of dementia, such as frontotemporal dementia, the tau protein sometimes accumulates inside neurons in the form of toxic “tangles.”  (An important side consideration is that there are a high number of Alzheimer’s patients without tau tangles so this is a symptom not present in all cases.)

By contrast, in a healthy brain, normal levels of tau help are support healthy structure of neurons.

In tauopathies, the buildup of tangles inside neurons can stop nerve cells from receiving nutrients and communicating with other neurons, leading to their death.

The study mice were fed EVOO and the control mice a normal diet.  A year later – equivalent to about 60 years in a human – the EVOO-fed mice had 60% fewer tau deposits.

The general conclusion is that the benefits of EVOO are from the extensive array of polyphenols present – these are plant compounds present in large numbers which have a myriad of health benefits when consumed.

What Should You Do With This Information?

First, I would highly recommend a trip to an olive farm and a tour of a facility which presses olives into EVOO.  Next, just keep on using EVOO as your main salad dressing, for marinades, and for low temperature cooking.  It’s already popular so it is likely you already may be using, but you now have another reason to feel awesome about doing so.

And if you want to get some of the EVOO from Italy as soon as possible after harvesting, I’ve found this company in the US that gets the fresh harvest imported each fall: Oligo2Go – https://www.olio2go.com/. I’ve tried several different oils and have enjoyed them all and they each have slightly different flavor characteristics.