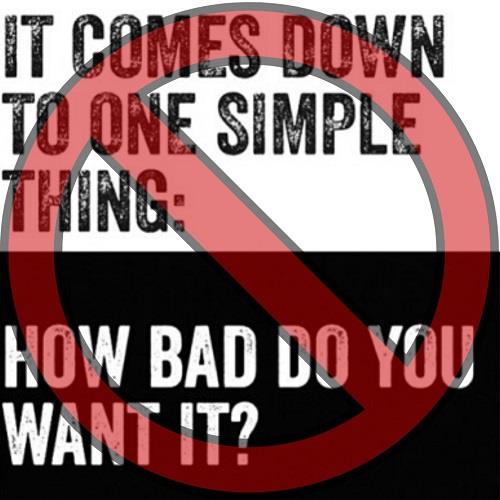 That’s what this time of year brings you.  Lots of people think they are motivating you with nearly naked bathroom mirror selfies and sayings like “If you want it, you gotta work for it,” and “Excuses are Worthless. Results are Priceless.”

As it turns out, perhaps not making exercise your top priority is a good idea. Some recent fantastic and fascinating research show that making it a “middle priority” allows for reality and avoids discouragement when your day goes sideways.

A middle priority is one that is important to you but is positioned such that the stakes of a single mistake do not feel as if they are life or death and that a mistake does not mean you are a failure and continuing is pointless.

This matches two key beliefs in the Funtensity approach:

Fitness is too often perceived by the public and presented by fitness pros to be something that must be grueling, painful, deeply challenging to both mind and body, and encompass a fair degree of what ordinary people would deem “suffering” to be worthy.

We change from consistent patterns of behavior and we only do things consistently which we at the very least do not hate doing.

In a study by Michelle Segar, highly active women appeared to treat exercise as a middle priority, leaving room for compromise when schedules and responsibilities got in the way of their planned exercise.

The active women gave themselves permission to do what they could and felt good about it. They did not beat themselves up when they didn’t get to do their planned or desired physical activity because they knew they would just fit it in another time soon.  It “was not the end of the world” when they couldn’t fit exercise in. They understood how being active benefited their lives, and because of that, they were confident that skipping a planned session was no big deal.  (Because it isn’t…we do not change from a single workout made nor a single workout missed.)

For Fitness Pros: stop all the over-the-top, stern-faced, hard-core “motivational” crap because it doesn’t work.