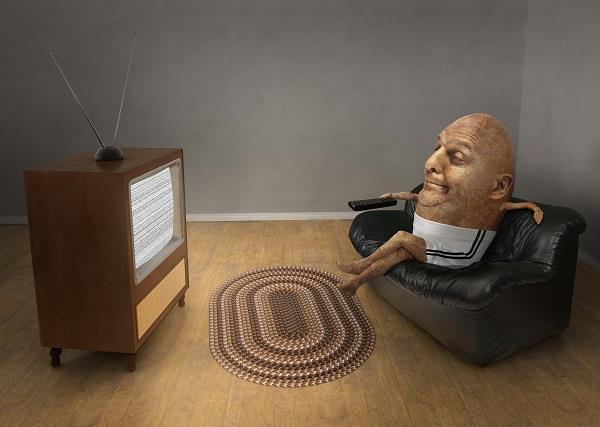 The Exercise Potato.  It’s a couch potato who exercises.

This is someone who exercises regularly but avoids physical activity and effort as much as possible for the rest of the day.

It’s almost as if the “check is in the box” for exercise and once it is, movement can be minimized the rest of the day.

This is a deceptively dangerous way to live. It gives you the illusion that because you exercise, you are doing enough.  When movement becomes a task that you “have to” do instead of a natural part of life, it sets up a dangerous pattern.

Now That That is Out of the Way…

If you are an Exercise Potato, once you have exercised that day…

…you might “treat” yourself to a doughnut at the office, a candy bar, or some other treat that only popped into your head because you exercised and now you “deserve a reward.” (This thinking has everything to do with a dislike of exercise. Done correctly, the post-workout feeling is its own reward.)

…you sit more often the rest of the day now that you have the workout out of the way.  Recent news stories have made the message clear that if you sit a lot, it raises your mortality risk – even if you exercise.  (Long stretches of inactivity limit blood flow to our extremities and create potential postural misalignments and muscle imbalances, among other things.)

…you feel like you “got it out of the way.”  This leads to being only one step away from stopping your exercise program.  You never find exercise or movement enjoyable enough to do it for its own sake so you will subtly avoid except when it is unavoidable.  (As a result, every workout takes an impressive display of willpower to once again force yourself to do something you know you should be doing.)

It can be so frustrating to be an Exercise Potato since, despite consistent effort at exercise, the Exercise Potato is unlikely to make much progress.  If you’re doing something because you’re supposed to, feel like you have to, and it’s supposed to be good for you but it fails to deliver the intended/promised result, you will be frustrated.

This is a versatile, always-on-the-go potato.  The Funtensity approach changes the emotional response to exercise and physical activity. Exercise become intense yet playful. Everyday life becomes filled with interesting, engaging movement opportunities.  The Funtensity Potato explores as many ways of moving as a couch potato does of sitting and avoiding movement.

Yes, exercise is essential. But so is daily movement sprinkled throughout the other 23 hours of the day outside of your workout.  Make the movement you do those other 23 hours more fun, interesting, and consistent and see what happens to the health of your brain and body.