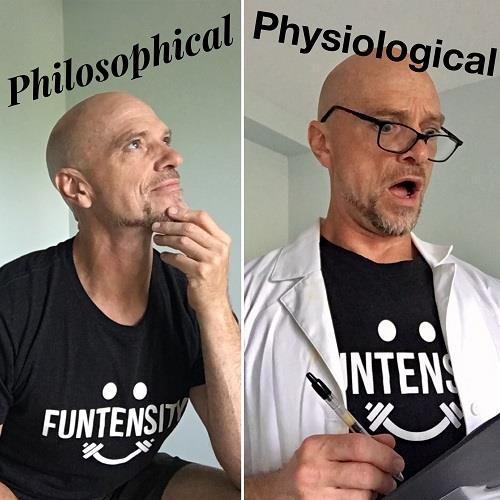 I do everything I can to avoid writing two-part blogs but this time it is unavoidable.  A quick, yet deep examination of the idea of “movement” on two distinct levels – one philosophical and the other physiological:

The last several months, I have been moving more, not less. And not out of a conscious effort to do so. It just kind of happened.

Clearly, I am in a minority.  If I read one more article or see one more social media post about gaining the “covid 10” or some other whinge about weight gain, I think I might set my eyes permanently to roll.

But it got me thinking about why I have just started moving more unconsciously.  Outside of my own workouts and the ones I have been teaching, I go stand-up paddleboarding (even more than usual), chopping wood, take our new dog on walks, trips to the park, and play and wrestle with him for several minutes several times a day, and a few other examples of increased movement.

I realized that on a deep, fundamental level, for me movement = happiness/fun/connection.  As a child if I was moving, I was most likely doing any of the following: ice skating, snowball fights, building snow forts or snowmen, going sledding, running through sprinklers, sprinting to the ice cream truck, bike riding, having water pistol battles and water balloon fights, playing Frisbee, lawn darts, football, soccer, king-of-the-hill, and on it goes.

Movement then, is a form of mental medicine where I can lose myself in the experience that gets as close as I can as an adult to those childhood moments where I experienced happiness as a state of being – moments of untarnished joy, moments when everything in my world – inside and out – was all right. (paraphrased from a line by the incomparable Christopher Plummer’s character in the film “Hector and the Search for Happiness.”)

I told you I was getting philosophical…

I hope that it is this way for everyone, but sadly, it is not as I discussed in the previous post “A Meditation on Motivation.”

The Truth Behind How Much Physical Activity Humans Should Get

As just about everyone has heard by now, the latest official Physical Activity Guidelines for Americans recommends adults get at least 150 minutes a week of moderate aerobic exercise, which comes out to be a little more than 20 minutes a day.  As I have written about previously in the blog “149 Minutes,” there are massive problems with this just on a conceptual level.  But this is about the science of that amount of time.  It turns out 150 minutes might not be enough.

The exercise authorities seem to have fallen into the same trap as the nutrition authorities, recommending what they think may be achievable, rather than simply informing us what the science says and letting us make up our own minds.

And this reminds me of another movie quote: “You can’t handle the truth!” the iconic line delivered by Jack Nicholson in “A Few Good Men.” Health authorities seem intent on softening the blow of the science on physical activity and health because as a society, we cannot handle the truth.

(Tip of the hat to Michael Greger for the above statistics and excerpt from his post on NutritionFacts.org.)

There you have it…a two-part blog in one and only slightly longer than usual.  Think about how you can shift movement to a more positive perception – one of the simple joy of freedom from worry and the sublime experience of being aware of your physicality.  Rarely has anyone regretted going for simple stroll or doing a workout. Once you’ve done it, it has nudged you toward a more positive outlook and enhanced physical health.