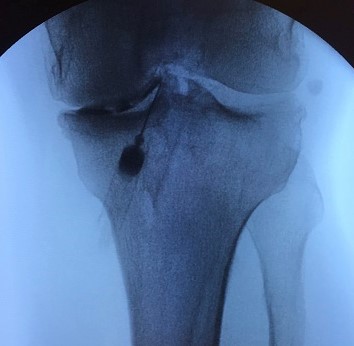 “Failure is not option.” I call BS. Failure is always an option.

If it were not, life would be easy.

After a recent milestone birthday, combined with numerous health challenges arriving simultaneously have resulted in a bit of deeper reflection on this idea.

Long ago knee injuries from sports resulted in the inevitable diagnosis of arthritis in 2008. After noticing some pronounced progression of the symptoms I was experiencing in the last several months, I decided to have a PRP injection, something I had done previously which proved to be of benefit. (Yes, that is my knee in the photo above receiving the injection.)

This required an MRI, as well as evaluation by several health professionals. It turns out, I also have some lower back issues: spondylolisthesis, a bulging disc, or stenosis. Or possibly all three! 🙄

This had me reeling for a few days, as it was a surprising development given the many decades of adulthood which I have spent focusing on healthy living, proper posture, and high-quality movement. All the more surprising for the fact that I have had a few episodes of relatively minor back pain here and there, but I would not report that area as one I was concerned about. Having never had any major trauma involving the low back, it was explained to me that much of what I am dealing with is likely genetic or congenital.

A fancy way of saying, “you were either born with it or it’s just wearing out due to bad genes.”

In my dismay and subsequent reflection on all of these developments, while feeling a little bit like my warranty had just expired and now all of my parts were beginning to fail, I finally landed on a tired cliche which is no less true for being a tired cliche: “It could be worse.”

(And, this could have hit me at a much younger age had I not lived as helpfully as I have, but there’s no brief cliché for that.)

Further, in looking at some of the issues that I have had I not lived a life of sensible health behaviors, I would not be as fit, active, and able bodied as I am now despite these newly revealed challenges.

Not blindly, pushing through pain. But sensibly, adjusting, treating, tweaking to make things better even while things are less than perfect.

Movement – and especially enjoyable movement – brings a sense of enjoyment and expansiveness to life that – at least for me – I cannot get anywhere else. I’m not choosing the failure option – the one where I stop moving.

Movement is life, both literally and figuratively.

If it hurts, don’t stop. Figure out what you can do to adjust, adapt, and advance.