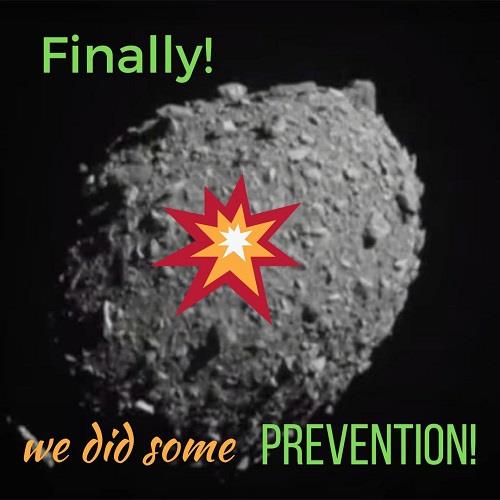 We finally did it.

We focused on preventing a problem long before it happens.

We made a small change in behavior that will create a large change in future trajectories – literally.

Human history is filled with examples of situations where we did nothing until there was a big mess to clean up.

Whether it is climate change, lifestyle-mediated brain or body disease, air or water pollution, or well…you can just about take your pick of problems, we rarely prevent a problem but remain idle until disaster or illness and then we scramble to clean it up or fight a disease with everything we’ve got.

Then came an asteroid.

NASA smashed a hunk of metal into an asteroid in a test of our ability to alter the orbit of an asteroid just enough to change how it moves.

If you hit an object in space early enough with enough force to just slightly nudge it enough to change it’s orbit a tiny bit, over great time and distance the alteration in it’s path will be significant.

A spacecraft crashed into Dimorphos, a small asteroid that orbits another one.  Neither one was on a collision course with Earth so this truly was just a test and proof of concept.

We spent millions to slam into an asteroid that was set to do us no harm. That way, we are ready to act to alter the path of a future asteroid that is on a collision course with earth.

There is no asteroid we are even aware of that is on a collision course yet.  And yet we took a massive step towards readiness when the day comes when one does. And the day will come.

We are more equipped to prevent the potential destruction of our ecosystem from one type of threat.  We might be able to save our planet.

But we can all do a lot to save our world. There’s an entire of world of hopes, dreams, experiences, and value inside of you.  Get moving often, occasionally in very challenging ways. Go outside. Consume food that supports your health, not your emotions.  Enjoy the sublime pleasure of feeling well-rested from getting proper sleep. Avoid as many environmental toxins as you reasonably can.

You just might divert that “asteroid” (disease) that might “come out of nowhere” (when it was really there all along) and create devastation.